My oldest son was invited to FOUR birthday parties this weekend! Many people warned me that once your kids hit kindergarten, the birthday invitations start pouring in, and that every weekend becomes Birthday Fest 3000. We haven’t really experienced that up until now… but I suppose the enslaught has begun.

One of these parties is for the son of a good friend of mine and since she had her hands pretty full this week at work I offered to bake the cake for her. It sounded easy enough when I offered… my cake baking style leads me to the nearest grocery store where I purchase a box of cake mix and some frosting in a jar, proceed home to my kitchen and whip it all together in about 8.2 minutes give or take the baking time required. Pathetic I know and I swear that I am ‘working on it’… I have even considered adding “bake real homemade cakes” to my resolution list for 2024. Then my friend informed me that since this is to be a spy theme party she was planning to make a bomb shaped cake (a sphere!)… and of course she had already pinned some lovely inspirational ideas. Hmmmm…. this simple cake just got a little more challenging. Enter my first experience with baking a cake in a bowl.

After some quick online research I decided to go ahead and bake the bomb-bowl cake and keep my fingers crossed that it would turn out just fine. I followed my cake box instructions to a tee (complicated, I know) and used a greased and floured metal mixing bowl as my baking vessel of choice. 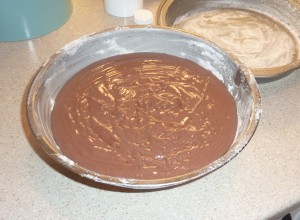 Baking the cake in a greased and floured mixing bowl

You can likely spot the regular round baking pan in the background. I thought I might divide the mix in half and bake a regular round 9″ cake for the bottom and then use the mixing bowl cake for a dome/bomb shaped top. I even had the 9″ all greased and ready to go but that greedy mixing bowl swallowed up my whole cake mix like a thirsty logger. So if you want to make a similar bowl/bomb cake, you may wish to consider two cake mixes (or a double cake recipe for those who actually bake from scratch). 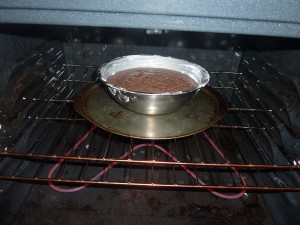 Bake it on a tray in the middle of your oven.

Following suggestions from online about baking in a mixing bowl, I placed my bowl on a pizza tray in case the batter decided to expand exponentially and blow out over the sides of the bowl. Luckily that didn’t  occur. I simply used the oven temperature suggested on the box and checked the cake after the suggested amount of time for a large cake. That baby was no where near done! Still completely liquid in the middle! It took about double the amount of time suggested to bake in the bowl versus in a flat pan (which makes sense if we consider our scientific understanding of surface area blahblahblah). Once I took it out of the oven I let it cool for about 10-15 minutes in the bowl and then popped it out onto a cooling rack. Tah dah! The grease and flour had truly done its job! Amazing…it popped right out with no trouble at all! That is a tip I will try again. 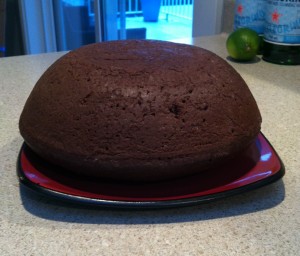 so we will have to see what can be done with icing to fix that little conundrum. I may have to create some sort of elaborate cake display scenario in order to disguise the fact that my bomb cake was a bomb… we shall see; full results to come!

So, in short, if you want to try to baking in a mixing bowl, my tips are:

And remember, my housie friends, HOME is not built in a day. Enjoy the journey!